The diagram represents a Newmarket coat. This style of garment seems to be in favour with many lady customers, and looks very smart when made from check cloth. The diagram is single breasted, and made with small turn collar.

Buttons are placed down the front about 2½ inches apart, as shown on diagram.

To produce a pattern, take one of the Tailor and Cutter tapes, size required, and mark out according to diagram.

The above instructions, though brief, will doubtless suffice to enable our readers to draft a pattern of this design. If the ordinary inch tape is used it will produce a pattern of 36 inch breast, and if a larger or smaller one is wished for, then it can be drafted by using a graduated tape to agree with the breast measure of the customer, simply checking the natural waist length, size of waist, and length of sleeve by the ordinary inch.

As a model of how this class of garment is cut in West End trades, this diagram will be very useful; and as it has been tested in actual practice, may be relied upon to produce a good fitting garment for the average figure.

This style of garment is very smart, and on a tall lady looks exceedingly well, especially when made from a smart material.

As Seen at Ascot by a Royal Ladies’ Tailor

Never, perhaps as far as can be remembered was there such a variation in dress at the meeting at royal Ascot as there was to be seen this year, from furs down to muslins and chiffons. Although the Ascot meeting is supposed to be at the very height of the season, yet this far for the first few days it was so cold and raw that a great many appeared in their spring coats and furs. Great disappointment was felt all round both by the wearers and the lookers on, by not being able to don their new Ascot costumes.

A great many go to Ascot, not that they care for the racing, but simply to see what is going in the way of dresses, and after the meeting several costumes are to be seen cut and made similar to what is worn there. As I had made several dresses for the meeting I was anxious to go down and if possible try and have a glance at them as well as the production of others.

As I said before the first few days of the meeting was a failure as far as show was concerned, but the last two days made up for the first. Everybody seemed to look their best. It is no wonder the poet cried out, “Breathes there a girl with soul so dead who never to herself hath said, ‘I must have a tailor made gown.’ “

Though it is impossible to describe on paper the beautiful things that were to be seen, I will try and convey an idea as clear as I can for the edification of those who were not there, of some of the pretty gowns that were worn on this occasion. Of course I shall not attempt to describe the dressmakers’ costumes, as they are too complicated in trimming, etc.

What struck me very forcibly was that there were so few shirts and blouses to be seen, they were all in short fancy coats and bodices.

The first costume which claimed my attention was made of dark blue faced cloth with white silk collar, revers and cuffs. It was ornamented with blue and gold trimmings. The coat was cut about 22 inches long fitting closely at the back and sides, and shaped to the front, the revers turned to opposite the most prominent part of the bust, and showed about two inches of fancy vest down the front. There was nothing out of the ordinary in the cutting of this coat, only cut as an open fronted coat with a large cut out of the front. The braiding was done in tracing down the front on the white silk collar cuffs and revers.

No.2 was a dainty little coat of silver grey cashmere, with a roll collar opening to the waist; the collar and lapel was scalloped every three inches all the way round, and trimmed with silver braid. Of course, as would be expected, all the coats were open fronted.

Several cream serge gowns were to be seen in different styles, most of them trimmed with cream and gold braids. Different shades of grey were to be seen either braided or trimmed with blue. The enclosed diagram was one that I made of blue faced cloth elaborately trimmed with a mixed blue and gold braid, the large revers and cuffs were covered with white moire silk, braided. As will be seen it was cut without a sidebody, only the back quarter body and forepart, the lapels turning back from the neck point of shoulder. As will be seen the neck is cut pretty straight as it forms the lapels. At the back was a high stand collar three inches deep, turning out. The collar only reached from shoulder to shoulder; under this was a white moire vest very full.

As most practical men who have had any experience know, the cutting of these is, comparatively speaking, an easy matter, the most difficult part being in the fitting. As I have said in a former article it is very essential especially to cutters of little experience to cut for the first try-on as nearly perfect as they can, so that they can devote more of their time to fitting and the matter of details. 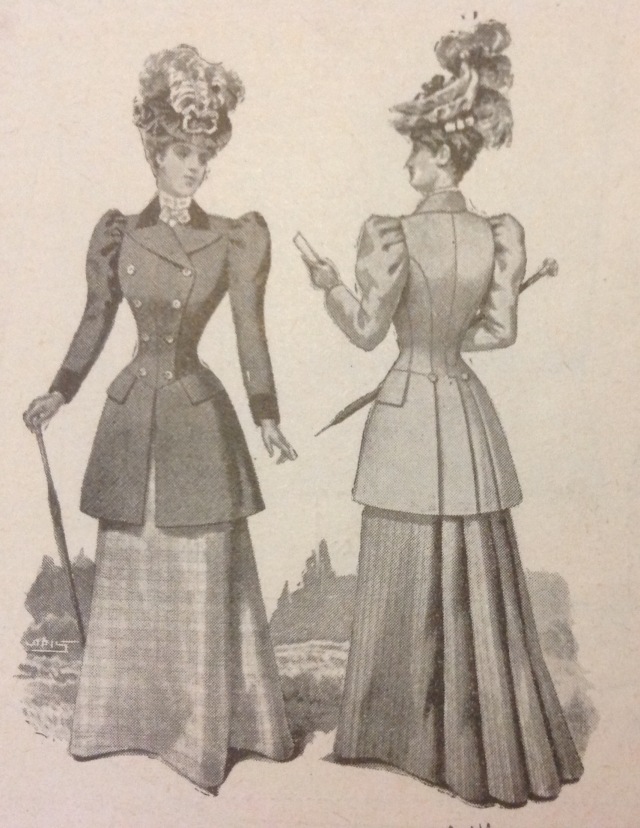 It may seem strange to some, but nevertheless it is a fact that the less your experience and knowledge of these things the greater your trouble; the reverse results occur with more experience, your work seems more satisfactory, and yet you have not exercised half the car, or taken nearly the trouble. I ought to qualify these remarks by saying that I do not mean in the result of the fitting, but in the general turn out, such as workmanship, and the several small details which the man of experience has so trained his eye, that he will see at a glance whether the workman is a man of taste or not, and whether he has carried out the full details which are given him with his sketch.

It is in this one thing in particular that inexperience very often spoils a good workman; he is not careful, or shall I say that he is not strict enough with the workman in getting these little details carried out, therefore his workmen get careless in time; they begin to think their foreman is not a very particular man, and he is an awfully nice fellow, he never encores a job. I am speaking now from experience, I have seen it and heard it, and perhaps done it when I have had an easy stitch of a cutter. That is how I contend a cutter can often spoil a good workman by being too kind and forbearing. It is possible to be strict and exact, and yet treat the workman with kindness when it is required.

Now to explain further what I mean by the lesser experience giving more trouble and vice versa. It occurs mostly in this way, the less experience a man has the more anxious he is about his work. If a cutter pays a decent wage, whether it is a log or a weekly wage he has a right to expect a job made right. If not he had his own remedy to a certain extent. Now a man of experience will never think of making that bodice as the inexperienced man does. He will give the workman the proper instructions of how he wants this, that and the other made, he will hand him a sketch of the costume, with the variations he requires, because we know that the sketches are not always required to be made to the letter, as a customer might like this sketch or the other with a little alteration in the fronts or trimmings, which of course when such is the case it is the cutter’s place to point it out to his workman.

While talking of sketches I think it is a capital plan, and money well spent, to have a few dozen of each design printed, which in these days is a matter of very little extra expense, as I have seen blocks of all the leading styles supplied from the Ladies’ Tailor Office at a very moderate price, so that when the blocks are procured the printing is a matter of very little outlay, not only that, but such capital single plates of these styles can be procured at the same office all ready to order. The advantage of this is twofold. First of all a selection can be sent to your customers on application or otherwise, and on the other hand a sketch can be given to your workman with the different variations noted out to him, and it saves the cutter no end of trouble; that is the reason why the experienced cutter turns his garments out with half the trouble.

As I have drifted into a channel into which I did not think of steering, and the space at my disposal is at an end, I shall continue my next article on the same lines, so as to make it easier, if possible, for the less experienced of our fellow craftsmen. In so doing I shall be only taking a leaf out of my own book, as mu experience has been varied and very extensive.

The diagram itself needs no explanation; it was cut to 34 chest and 23 waist.

In my future articles I shall show how these fancy costumes go from beginning to end, how they are cut, in what state they are tried on, and how they are prepared for making the braiding etc. 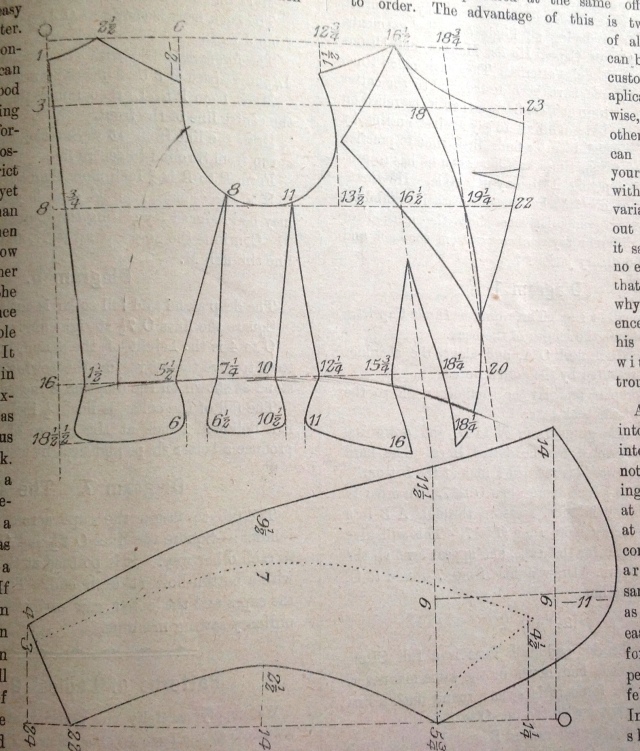